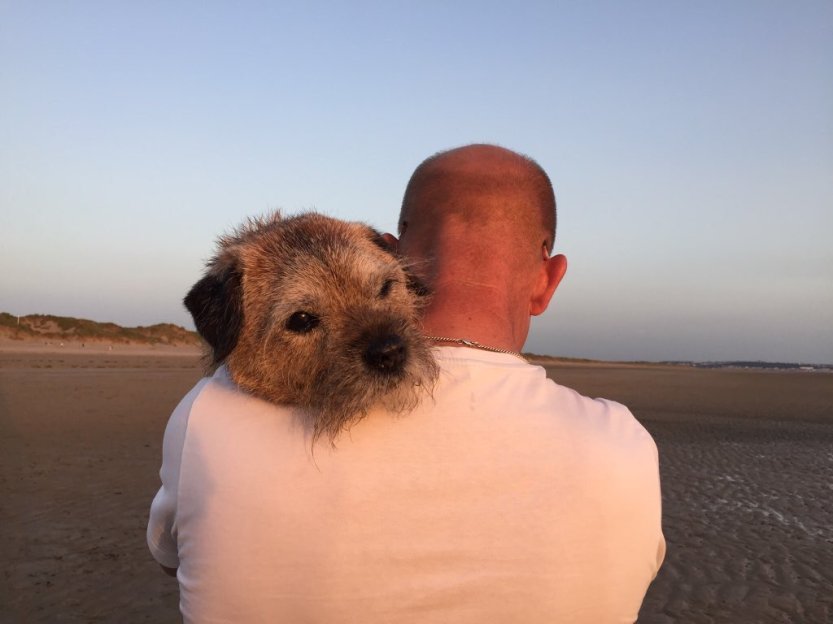 Admittedly, Twitter can be a real cesspool full of weirdos and nutjobs who crawl out of their respective woodworks to bicker and cause drama whatsoever. Mansplaining included. It gets stressful at times.

But there are also beautiful parts of it. VERY beautiful ones. For example, Dog Twitter.

If you know me, you will also know that I am a 100% Dog Person, always have been, always will be. I basically always had a dog around in my life. As a kid, I was fascinated with Siberian Huskies, Alaskan Malamutes etc. and wanted to own at least one of those. Then, I fell for (black) Newfoundlanders because they look like little bears. And you know my obsession with bears.

However, everything changed in 1996. After our Schnauzer, Bingo, had to be put to sleep, my late Dad said, he didn’t want any other dog again. Because having a dog means a lot of commitment. This “no more dog” stance lasted for a couple of weeks. Then, he asked me to bring him my book about various breeds as he felt we needed a dog again. Long story short: one dog became two dogs, as Dad decided the next dog was gonna be a Border Terrier, and the breeder we contacted offered to take a little girl with us as well, as the original person who had shown interest didn’t pick her up.

These little brown dogs captured my heart the moment I saw them. I fell for them. HARD. And ever since, I have been utterly OBSESSED with that breed. They’re so full of character, fun, love, and life and you’re in for years of having a faithful companion by your side, given that the breed can live for 12-15 years, some even longer. Even though both our Border “Terrorists” have already crossed the Rainbow Bridge in 2010 (Lady) and 2013 (Harley, just a few months shy of his 17th Birthday), I still miss the little rascals. They were total entertainers, and typical terriers, too.

To my biggest joy, I found out that there are like-minded people on the Internet as well, people who are completely in love with this particular breed, and I happily joined some Facebook groups about them. Same for following some accounts on instagram and Twitter. Just to see the joy these little brown dogs with their big personalities bring. Having a bad day and looking at pictures, videos or reading stories about them makes me smile. It’s also an exchange of stories, tips, advice … and usually, there’s no bickering, but support.

At some point, I found the hashtag #BTPosse on Twitter and instagram, and since I am a VERY curious person, I decided to check that out … yep, you guessed it – Border Terriers galore. HOO. RAY. That had to be fun, right? You. Bet.

It didn’t take long for me to make friends there. Or chat to BTs and their “staff” (because, you know, you don’t own the BT, the BT owns you), laughs, fun and everything in between included. It’s like a big, big family – a “posse”.

On Thursday, I caught a post on both, IG and Twitter, that one of the most prominent members of said #BTPosse, Sir Seb, was going to cross the Rainbow Bridge on Friday at 6pm my time. Sir Seb was a 16 year old gentlefur, very wise, full of love, who loved his beaches, balls, sunsets/sunpuddling and his hoomum and hoodad. The picture I have chosen for this entry is actually him with his hoodad, and I’d like to thank his hoomum for allowing me to use it. It captures the love of a dog and his hoodad perfectly.

What happened next was one of the most touching and beautiful things I have seen on Twitter in a looooooong time. I am actually still crying a bit because I am so moved by it. Since Sir Seb was so well known and LOVED, essentially, the #BTPosse gave him a beautiful Send Off to the Rainbow Bridge. A real Guard Of Honour for the old, little, wise man. The hashtag #SirSebSendOff even managed to trend in the UK on Friday! Candles were being lit, lots of well wishes posted to Sir Seb and his hoodad and hoomum, and one person even said, they had no idea what the hashtag was about, but when reading the Tweets, they felt their heart break.

There were so many heartfelt wishes and SO MUCH LOVE posted in that tag, it was an absolutely worthy send off for Sir Seb.

He was more than just a dog. He was a real character. He touched many hearts and souls with his friendliness, his love, his wisdom. He may be gone now, but he left paw prints in people’s hearts. And while I never got to meet him personally, it sure was a pleasure to follow him and his adventures. He made me smile, and I feel honoured have been there for his send off, albeit online only. But I felt the connection between everyone who was actively posting when his time had come.

you were one of the most adorable furry friends I have ever had the pleasure to come across. You’ve had a pawsome life with your hoomum and hoodad. You made people feel loved and brought them a lot of joy with your kindness. I remember when you told me that you loved the virtual belly rubs I occasionally would send you. And how lovely and lovingly you welcomed every new member of the #BTPosse. You saw amazing places your hoomans took you to. Meet ups with other members of the #BTPosse included. You showed everyone and everyfur the meaning of true love. As the featured image on this post perfectly illustrates.
I know it was hard for your hoomum and hoodad to let you go, but I also know that they will love you fur-ever, and the memories you shared together will never be erased from their hearts. You touched a lot of people’s lives – mine included. As I am typing these lines, my eyes are welling up with tears again, and I only knew you from your posts.
Run free, my furry friend.
Until we meet again …