Remember that I said in my last post how I’d been toying with the idea to head to Dresden (Saxony) to see BAND! again? While getting to Dresden would’ve been easy peasy, getting back to Berlin would’ve been an issue: either, I’d have to leave the show early or I’d have to camp at the central station in Dresden until 3am. Neither of which seemed too overly appealing. Fortunately, I know the right people, and at the ANY GIVEN DAY gig last FriYAY, I met one of my folks I usually always see at BAND! gigs in Berlin. (By the way, if you’re into metalcore etc and ANY GIVEN DAY are performing in your city, go and see them. They are one heck of a live band!)

Long story short: all of a sudden, going to Dresden didn’t seem impossible anymore. All I had to do was taking care of the ticket. That was when I shamelessly contacted Dav and asked him if he could put me on the guest list for that particular show. Now, Dav is Dav and awesome and the absolute bombdiggity (and I WILL fight you about this!): “Absolutely no problem!”

I mean … how fucking cool IS this?? They know me so well by now that they put me on the guest list?? YOWZA! (Yes, there are times when my life is still impossibly awesome, folks.) Mind, there are people who’ve seen them much more often than Yours Truly, but then again … ah, I’ll elaborate on that in a few, bear with me. Either way, I was grinning from ear to ear because SHENANIGANS. And BAND!. And Happy!Place.

So off to Dresden it was on Saturday afternoon for a nice little adventure.

I mentioned my name to the guy at the entrance who checked with the names on the guest list, and ta-daaa, there was mine, and I happily waltzed straight to the barrier because I needs my front row spot. Stat.

And since at a BURY TOMORROW show basically everyone’s pals, I got to meet some other nice people, and at times still was in utter disbelief that I was there indeed for my 9th BAND! gig and front row (as per usual) AND on the freakin’ GUEST LIST. Like … THIS? Is what dreams are made of, and I was super-happy. I actually still got teary-eyed a couple of days later when I was thinking back of this evening, as my heart is so full of love for this BAND! … can anyone blame me? Don’t think so.

Tongue!Porn with Jason Cameron (who gave me his guitar pick, yay!) 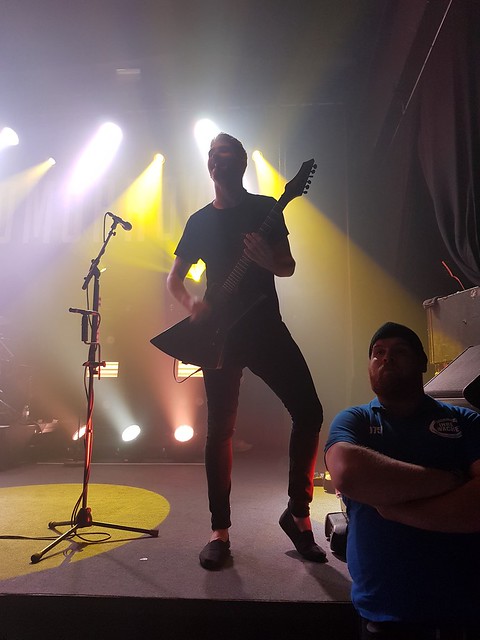 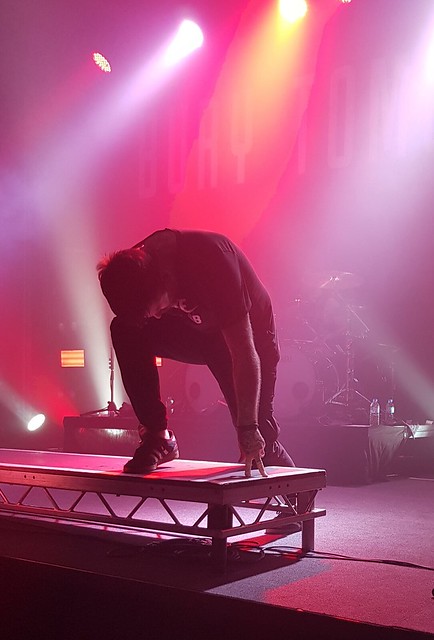 So, in a way I ticked something off my Bucket List as well here – first time seeing BAND! twice on the same tour, in two different cities AND being on the guest list. Nice.

After the show, it was of course off to the merch, because …reasons. Sure enough, Dav (who, btw, has “YOUR SAVIOR” written in his Twitter name, and yes, well, MY savior indeed … *chuckles*) was the first one to show up. We hugged immediately, and I thanked him once again for his kindness to put me on the guest list. He looked me dead in the eyes and replied, “I told you – you need anything, message me.” He did actually say that after the gig in Berlin, and there ya go. Later on, Dav was like, “I love the Kiwi!” Hehehehe, yeah, they know my alter ego too well! *chuckles*

I also briefly talked to Adam, who was of course surprised to see me there in Dresden. Expect the unexpected, right? And finally, I also saw Dani and he, too, was surprised. “It was a spontaneous decision to come here today, and your brother put me on the guest list.”
And there’s Dani, smiling: “Well, if you ever decide spontaneously again to come to a show and need guest list again – message us.”

SEE WHY I FUCKING LOVE THIS BAND!???

They don’t shower you with empty words and phrases, they actually MEAN what they say!

Meanwhile, the UK leg of their tour has kicked off, and Dani – who is awesomeness personified – has organized so-called “Safe Spaces” in which people can talk about mental health as Dani is very passionate about this topic as well. Which makes me admire him all the more. Even more so since my own mental health has been on a constant hike downhill for some time now. I’ve been in quite the big funk lately, but seeing my favs twice sure put a smile on my face. This is kinda another form of therapy for me, as it puts me out of misery for a while, leaving all that bullshit I am dealing with on a daily basis behind. It’s like I found a place to belong, so I went right in (reference to “Married To The Noise” by STICK TO YOUR GUNS completely intended).

I crashed into bed at 3am afterwards, but whatever …

Was I knackered after three metalcore gigs in four days, road trip and lack of sleep? Most definitely.

Did I sleep for a good 20hrs the next two nights? Positive.

Was I ridiculously happy? And my soul smiling? YOU. BET.

And y’all know what? I’d do it again. No regrets. Do more of what makes you happy, right?