The concert of my very favorite BAND!, aka BURY TOMORROW, here in Berlin on Tuesday evening couldn’t have happened at any better time. Because it was just what my soul needed.

Frankly, I’ve been in a total funk again as of recent, my mental health had taken a nosedive, and I was not myself at all. I was basically on auto-pilot again, somehow just functioning and that’s it. Stressed. Under pressure (especially when it comes to making some decisions, long story). Sad. All that. So here I was once again struggling. Living with a mental illness is no fun at all, but I am still trying to make the very best of it.

That includes seeing my BAND! guys again. That was the one thing I’ve been looking forward to these days, and as I have stated before, they keep me sane with their music. (Although my crazy ass did check if it was possible to travel to Dresden on Saturday to see them again … ahem. I never said I was normal!) They are my inspirations, they have helped me so much with their existence, their lyrics, their kindness, all of that. And above all, they make me feel confident about myself, something which is rather rare, given that I loathe myself more often than not.

This time, their concert here was going to be even more special since it was Dani’s birthday – which got my creative juices flowing, and I sat down and prepared a huge ass sign that read HAPPY BIRTHDAY DANI on it, including two BLACK FLAME logos (because, let’s face it, that fucking album is a MASTERPIECE). Later on, some of the folks I usually hang out at their shows with signed it, too.

So yeah. That bad boy was coming with me. The original plan was to give it to him before the show, but unfortunately, the lads didn’t come out. However, Jimmy, their merch guy, said I could leave my stuff at merch, an offer I gladly took up on. Because the sign wouldn’t have survived the concert, I am sure of that. Also, we weren’t allowed to hang anything over the barrier, so there’s that, too. And just as it happened, I came back from the toilet when Jimmy needed some change (someone had bought some merch but for some reason, he didn’t have the right change on him). Thankfully, I had the exact amount of cash with me, so I could split the amount into smaller parts. So we legit helped each other out, and that’s another thing I love about everyone involved with Bury Tomorrow: basically everyone’s pals.

Before the show, kinda “bad news” trickled out, as Jason posted an IG story that he had woken up with the flu. BUMMER! But Jase wouldn’t be Jase if he didn’t do his best … 😉 More on that in a few.

When the lads finally took the stage, I was totally in my Happy!Place again, front row, and in front of Jason – where I belong. They performed the entire BLACK FLAME album front to back, and legit tore down that venue. During the break between “Adrenaline” and “Black Flame”, the crowd started singing “Happy Birthday” to Dani, and he was super appreciative of that already. Later on, we sang it again, as Jase and Kristan asked us to – all while Dani drank from a huge ass boot-shaped glass of beer.

So Jason … like, you know, he’s sick with the flu and STILL hits all those notes, sounding all amazing. Putting it all out. Just like Dani. And Dav who was shredding his bass. The self-made Rock God, Kristan. And Adam hitting the drums. Feeling those drums pounding through my body gave me fucking LIFE, y’all. It was as if all those shitty feelings from earlier were leaving. Sure, it’s only for a while, but … being able to actually BE THERE and enjoying myself meant EVERYTHING to me that evening. Stat.

Here, have some pics: 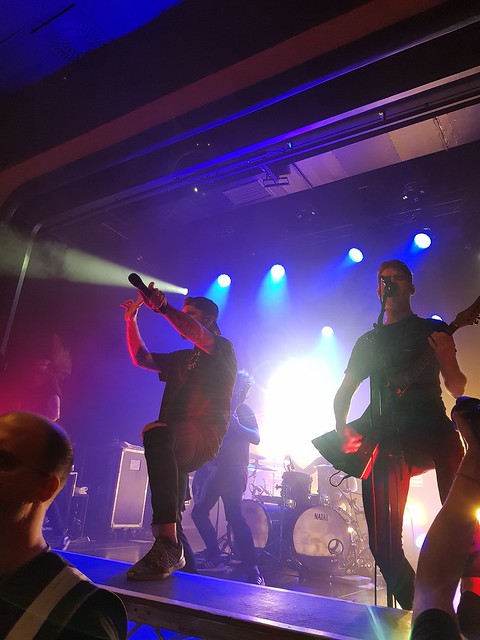 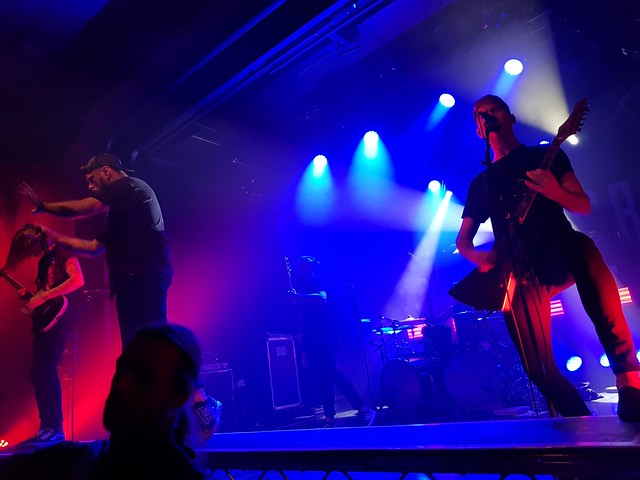 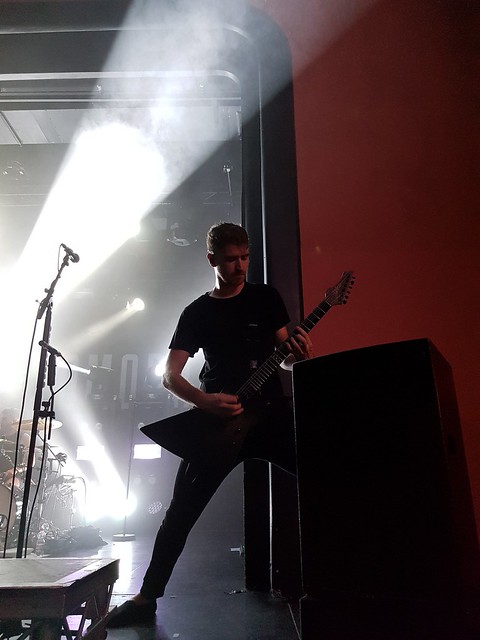 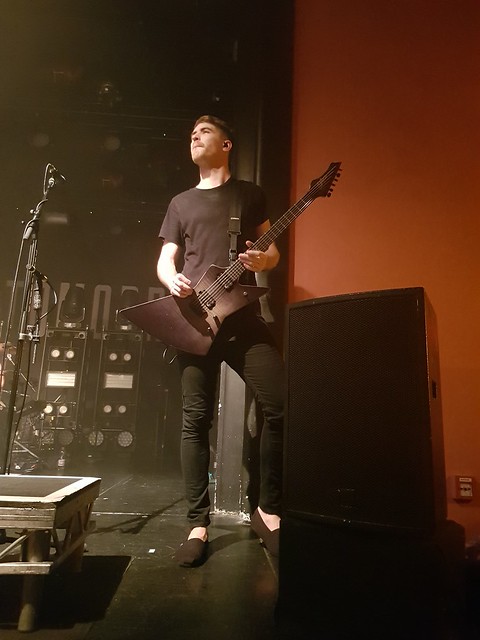 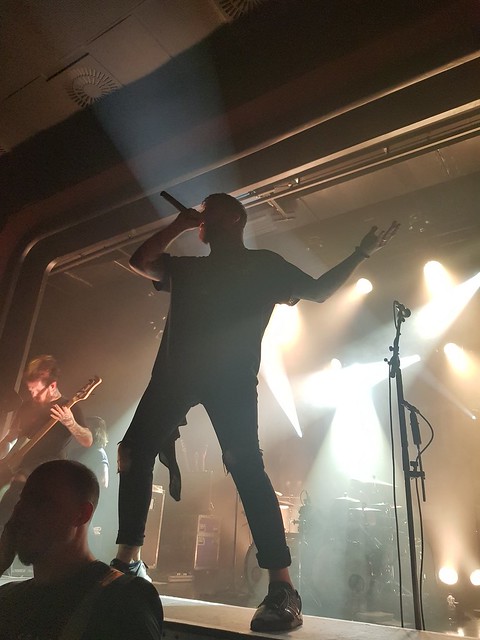 While I didn’t get any souvenirs this time around, I still had a fantastic evening. I also refused to have my pic taken with the boys, because, quite frankly, I wasn’t in the right mind for that. All I wanted was meet them again, talk to them, and of course, deliver the goodies. So off to merch it was where Jimmy handed me back the tote bag with the gifts and the Birthday sign, and then shit got amazing once again.

The first one I spotted was Adam, and since the tradition has to live on also on this tour, I had that box of Ferrero Rocher with me. He had his back turned to me, so he didn’t see me. I carefully and sneakily passed on the Nom-Noms to him, and in that moment he realized what’s up and hugged me immediately. You know, it makes me smile how appreciative he is of this little gesture. He asked how I was doing, so I was honest and straight up and said that 2019 was a shit year with the fatigue and all, and he was actually listening to what I had to say. And that means A LOT to me. I also congratulated him on getting engaged recently.

Next, I discovered Dav. And he saw me immediately: “My Queen!” I kid you not. That was what he called me. Like … we hugged tightly, because this guy is just the freakin’ bombdiggity, and I WILL fight everyone about it! Next thing I know is he looks me dead in the eyes and said that he saw on my feed that I hadn’t been too overly well recently, and encouraged me to reach out and check in when I need someone. I mean … THIS is why this band is so fucking special. To them, you’re not just FANS, you’re A PART of the whole thing! They’re caring about the folks coming to their shows. They bend over backwards to put a smile on the fans’ faces and make sure to talk to everyone. (Just as Dani said during the show: “You guys saved MY fucking life!”) They treat you with a kindness that leaves me speechless again and again. And although I am heading to double digits now with how often I’ve seen them, it is still amazing. The best part about this is that they don’t charge a single fucking extra cent for you to meet them. You just pay for your ticket, waltz over to merch after the show and there they are and literally welcoming you with open arms. Dav hugged me again and said, “I love you, okay?”

When Dav saw that huge sign, he DEADASS said, “You LEGEND!” It did cause a couple of impressed looks for sure, ha!

Of course, Dani was hogged by other fans, so I waited patiently until it was my turn. And let me just say … his reaction when I handed over the sign was priceless and all sorts of adorable. He was really happy and overwhelmed about the effort I had put into this and thanked me profusely for it. (Two days of work, btw.) But you know, I had no idea what else I could give him, and just writing a birthday card was too boring for me, so being creative it was, and I think this is something special, too, as it was made by a fan. And really, he was so cute about it, it made my cold, dead, black heart sing. We talked about their new song “The Grey (VIXI)” and “Glasswalk” whose lyrics are dead on and I can once again relate to in a way it’s unbelievable. (Btw, Dani is VERY passionate about Mental Health Awareness, too, and you can imagine that I appreciate that a lot as well!)

All of a sudden, Kristan appeared as well, and I was really excited to see him again, as he had escaped me a couple of times. And while he is the one I have had the least interactions with, he remembered me straight away and hugged me tightly. He was like, “So you’ve seen us for the 87 millionth time now …” BWAHAHAHAHA! I also talked about “Glasswalk” to him and how that one just came out at a time when I needed it, including the fact that it made my fandoms collide because of JE11’s documentary. He was also very curious about my struggles lately, and listened to what I had to say. Again, they actually CARE about their fans, and that is so mindblowing, I lack the words.

Being that Jason was so sick and I didn’t want to bother him, I asked Dani if he could give the prezzie I had for Jase (a black scarf that has YOU’LL NEVER WALK ALONE on it – an idea I had the other day when the guy did an IG live video and looked freezing and since last year’s scarf had been a huge success, I thought why not?). Turned out, it was the absolute right idea, with him being sick. “Could you give this to Jase? I think he could use a scarf …”
Dani grinned and replied, “Sure! I’ll tell him it’s from you.” Because you know, they fucking know me. Maybe not my real name, but sure as hell my face and my online alter ego.

Later on, on the way back home, I posted a long essay on IG, tagged the whole band, and then this happened and I was legit OMG! and almost started crying, too. 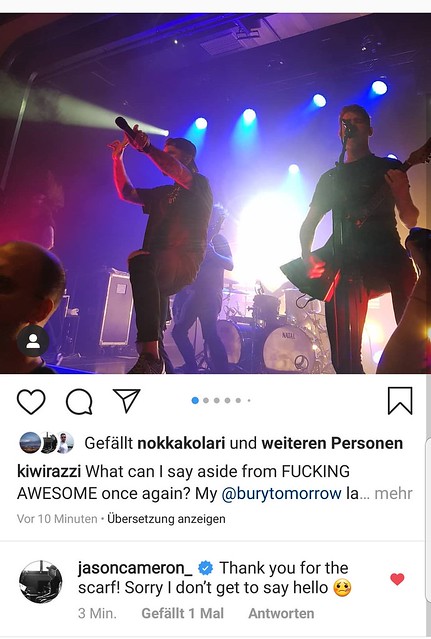 It’s just a small gesture, but it means the whole damn WORLD to me. And he most definitely didn’t have to apologize for not stopping by. It’s more than understandable that he didn’t this time. Btw, Dani liked Jase’s comment later on as well. This BAND!, y’all.

A new album will come out next year, and I am curious to see and hear what 2020 has in store for the guys. For now, let me just say that I am so incredibly grateful for what the boys have done for me in the past 7.5 years since I discovered them, and 5.5 years since that first gig. I have made actual friends because of them. They’re a light in the dark. Maybe also some kind of savior for me when I struggle. Their lyrics speak to me on a level I lack the words to describe accurately. They have helped me so much – and that alone is a reason why I love them so freakin’ much. And that is also why I kinda give back with the little prezzies for them every now and then.

Dani, Dav, Jase, Adam and Kristan … I cannot THANK YOU enough. You will always hold a special place in my heart.