My favorite mythological / fictional creature is the Phoenix.

No dragons (sorry, Daenerys …), no vampires (at least not those of the sparkling variety, kthxbye), no mermaids, and no unicorns, either. Instead, it’s the bird which rises from the ashes.

I know, it sounds contradictory at first that I, the one who loves the water and is, actually, a bit scared of fire, love and am so fascinated by the Phoenix. It also seems to be kinda contradictory since water and fire both are each other’s antagonist. And yet, it makes perfectly sense. Water symbolizes life, as dangerous as it can also be. The Phoenix dies and is born again.

I remember some years ago, when one of my Twitter friends wrote, “I admire you – you got knocked down so many times, and yet, you always got back up again.” And there you have it – the analogy to the Phoenix.

(It’s also probably not too overly surprising then that I used to have a blown up photocopy of the cover of Chumbawamba’s “Tubthumping” single on my cupboard in my old place:
“I get knocked down
But I get up again
You’re never going to keep me down!”
Only, back then I didn’t have any idea how much that part of the song kinda would become part of my own damn biography.)
But, I digress …

Back to the Phoenix and Yours Truly.

As I said, there is an analogy to the Phoenix and my own life. I have been dealing with a lot of hardships in my life. Life has shown me things I never really wanted to see or experience, and yet, I had to. I got knocked down again and again, and while I of course could throw an epic Pity Party for One, I won’t. (I have been accused of exactly that, but really, guys, that is kinda the biggest misconception of people who are suffering from mental illnesses.)

Instead, I would like to compare myself to the Phoenix. Okay, I didn’t have to literally die to be reborn, but the saying “Rising from the ashes” fits to a T. (Also, in Late Antiquity, the Phoenix became the symbol of immortality, especially because he managed to heal himself after his foes wounded him. There are, of course, also religious meanings, but you can look that up for yourselves.)

Rising from the ashes: “To emerge renewed, revitalized, or reborn as something different following some total destruction or ruin.”
(source)

Honestly, I can relate to that. Back in 2010, when I had hit rock bottom and subsequently spent a total of 17 weeks in clinics to get my life back on track, I emerged from that, maybe not as an entirely new person, but certainly a different one. There were, obviously, still a lot of things I had to cope with (like for example my Dad’s passing away shortly after I had been released from the clinic) and behavior I had to unlearn, but in the end, I managed to rise up again. Including changing some things, like for example moving to Berlin or getting legally rid of my middle name. 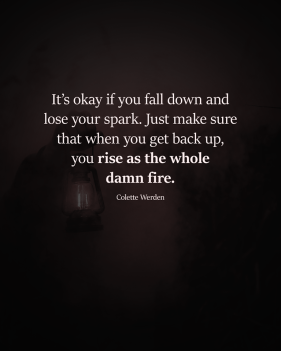 So when I saw this quote on Facebook the other day, things started to click once again. Aside from saying “YES! THIS!”, that is. I fell down, into a giant, deep black pit. I had certainly lost my spark as well. (Well, maybe not that tiny one that kept me going, but you get the point.) Things were bleak, horrid and dreadful back then. But with patience, and a lot of hard work, I managed to rise again.

Granted, and that is the thing with depression and anxiety (as well as other mental illnesses), there are days when I am just like, “Nope!” and just want to be left alone because everything’s “too much” in that moment. But in the end, as the great Vince Lombardi once said,

So yeah, I can relate to the Phoenix A LOT because I have been there. Down, but not out. And still I rise. I am not saying I have become invincible, but all the shit I have been through made me stronger. Who knows, maybe I survived because the fire inside me burned brighter than the fire around me? (another quote I read online somewhere a while ago, which I also found fitting; and one of my online friends said once, “You’re a survivor!”)

While I don’t know where my journey will be taking me in the end, I am curious, maybe even excited, to find out. And so I rise above, like a Phoenix.