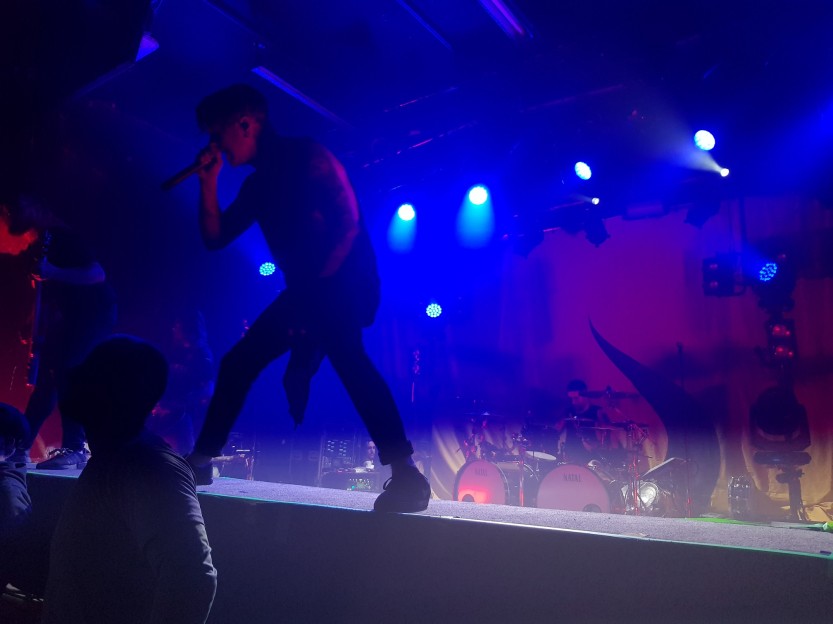 First things first – my BURY TOMORROW lads laid down the fucking law in Berlin on Friday evening. No matter how often I go to see them, I always leave with a big ass grin on my face and super happy. And I am again and again impressed how humble and kind they are. I mean, they’re taking a lot of time to chat with the fans, sign stuff, pose on photos … the whole nine yards. And the best part is: they’re doing that for free. You just go to the merch after their show and there they will be and happily meet the fans.

Moreover, I am in my Happy!Place for some time which also cannot be a bad thing. This time, I was already dealing with a kind of End-of-the-Year-Anxiety, which usually kicks in really hard this time of year. Fear of crowds and all included, so that was going to be a factor I had to calculate with. And of course, shit hit the fan on the way to the (sold out) venue, and I had a mild anxiety attack, but fortunately, all went well. I was like, “Not today, Satan, I won’t let you win!”

However, I had taken the whole thing to Twitter by writing a kind of PSA in which I explained the issue, that BURY TOMORROW gigs are one of the last things I put myself out there and face my fear of crowds, and also asked them if they could RT it. Sure enough, Dav caught that Tweet (so did Adam) and RT’d it, including a message:
“A place for everyone.
Super proud of you – See you tomorrow!”

Freezing in the cold, wet rain for several hours prior to the show was sure something …else, but damn, it was WORTH IT again. Front row spot included. And of course I could deliver some of the prezzies for the guys – especially Adam and Dav – before the show as well, because Adam was so kind again to quickly come out to pick up the goodies. Adam definitely was happy, so was his girlfriend, and he also said, “You stay out of that pit!” because I was wearing my wrist brace, precautionary.

While the roadies were preparing the stage for the final opening act, Dav legit recognized me in the crowd, and started non-verbally communicating with me, including bowing in my direction as a “thank you” for the little gift.

As soon as the lads took the stage, I forgot all my woes and worries of the past couple of days and weeks. I felt the drums pounding through my body – and also so … ALIVE, even. Their energy on stage. Their interaction with the crowd. Their music. It’s something special.

Here, have a pic of Dav and Dani doing their thing: 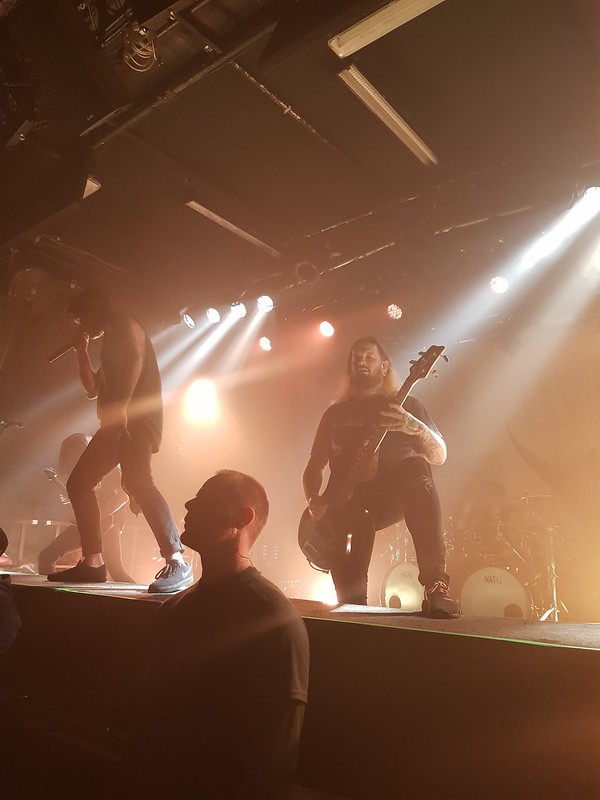 Plus, they make you feel like you come into a place where you BELONG. No matter who you are, your social background whatsoever. Just as Dav wrote in the Tweet: “A place for everyone.” And this is so true.

Dani asked who had seen them before, and I couldn’t help but holding up my scarf I had gotten earlier last week, so he looked in my direction, grinned, and said, “Yeah, I know – YOU have seen us several times already!” See what I mean? They. Fucking. CARE. 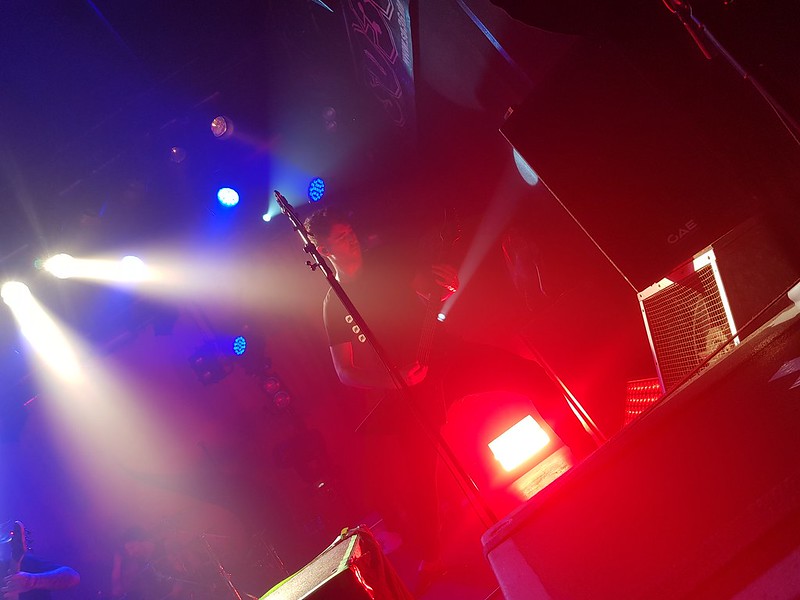 Granted, Jason didn’t have the best day at the office, as not one, but TWO of his guitars decided to abandon him. But he is most definitely one of the nicest fellas out there, and HIS. VOICE. Like … DANG! He was really frustrated about this mishap, but you know, there is a little special bond between him and me, and …

Here, have some pics with Adam, Dani and the #SexySelfie with Dav, because that is kinda our thing.

Dani. He legit greeted me saying, “Hi, my love!” and pulled me in a hug immediately. At this point, I’d like to wish him a very HAPPY BIRTHDAY also on here! 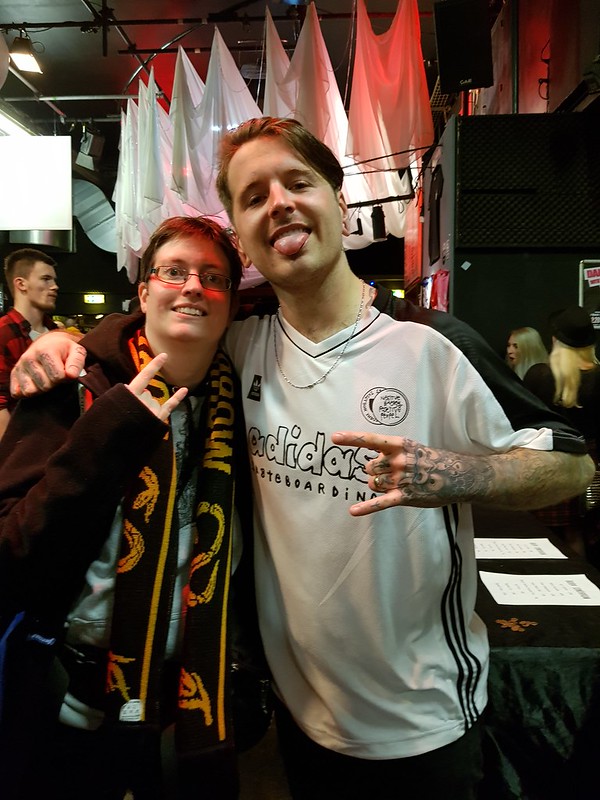 Dav. I thought he was never gonna let me go again when he hugged me. So here’s our VERY #SexySelfie because we fucking CAN! 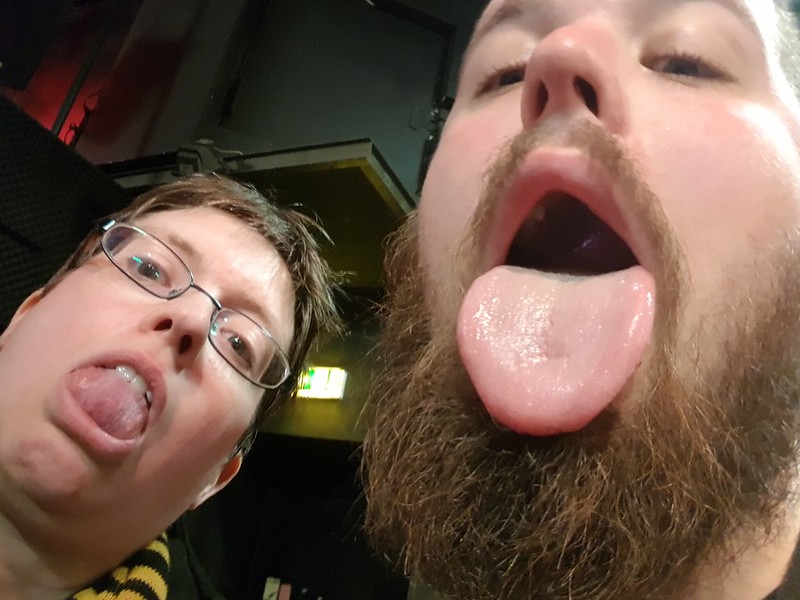 And because I prefer the drummer 😉 – here, me and Adam. Who likes his Nom-Noms. Which has sorta become a ritual. 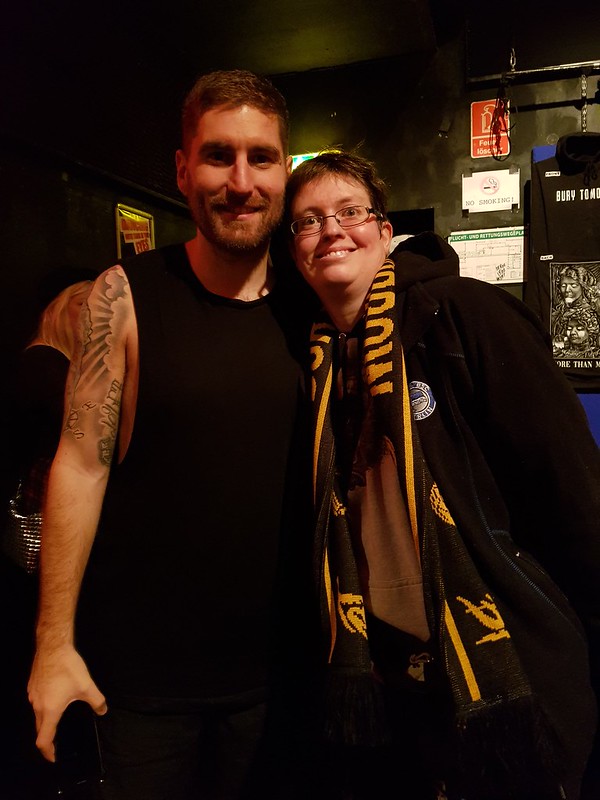 Jason, however, was nowhere in sight, and the security kicked us out bit by bit. Hrmph. But fortunately, I know whom to ask, so I did, and then made my way outside, because, well, security.

While I was waiting outside again, I got to watch the roadies and all load the trailer and the bus with the opening bands’ stuff, and after their tour bus had left, the roadies were busy with the BT stuff. I had seen guitarist Kristan leaving the venue during the loading process, but reacted too slow, otherwise, I’d have gotten his sig as well. Meh! Second show where he escaped me. Rude. 😉

Since he hadn’t returned in a bit, and the roadies were still busy, I knew that Jason was still there. And even if I was legit an icicle by that time, I decided to stick around, as a tiny voice inside me kept telling me that I would get my chat with him. He’d NEVER let me down. NOPE. NOT Jason. That I was the ONLY non-staff member hanging out there is of course yet another sign that I am a bit nuts at times, but hey, patience pays off, right?

BECAUSE HE DID SHOW UP! After a bit of an eternity, but whatever. There he was. He immediately hugged me, and it felt SO GOOD to see and talk to him again. He also apologized to me for letting me wait so long. Awww.

I said, “I got something for you!” and handed him a nice scarf of a certain footie team. I swear – his eyes lit up, his smile was back on his face, and he said, “This is rad! I need a scarf!” We hugged again several times, and I flat out told him, “If you ever want to come to a home game, holler at your girl and I’ll hook you up with tickets!” He liked that … 😉

We chatted a bit, and he told me, “I had the worst show EVER!” because of the aforementioned guitar fuck up, but I definitely DO think the little gift cheered him up. (Even more so since I’ve seen him rocking that scarf at the gig in Leipzig, ha!) Why is he so goshdarn adorable and nice? Like, he has a completely shitty time on stage, and yet, he spends some of his time outside in the freezing cold to talk to me? Words don’t even BEGIN to express how grateful I am for this.

And this? This is why I don’t regret anything and would do it again exactly the same way. I mean … LOOK AT OUR SMILES! 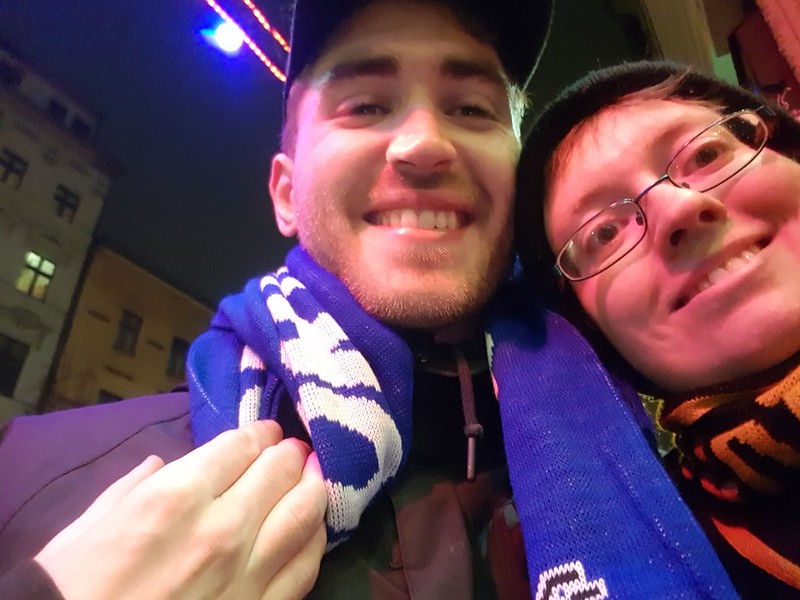 Jason was like, “I really like that one!” (We took two, but the first one is more of the “Why so serious?” category when it comes to me.)

Bottom line is, the guys make me happy. They keep me sane. And my life would be a lot duller without them.

2 thoughts on “Restart the age, ignite the fire”