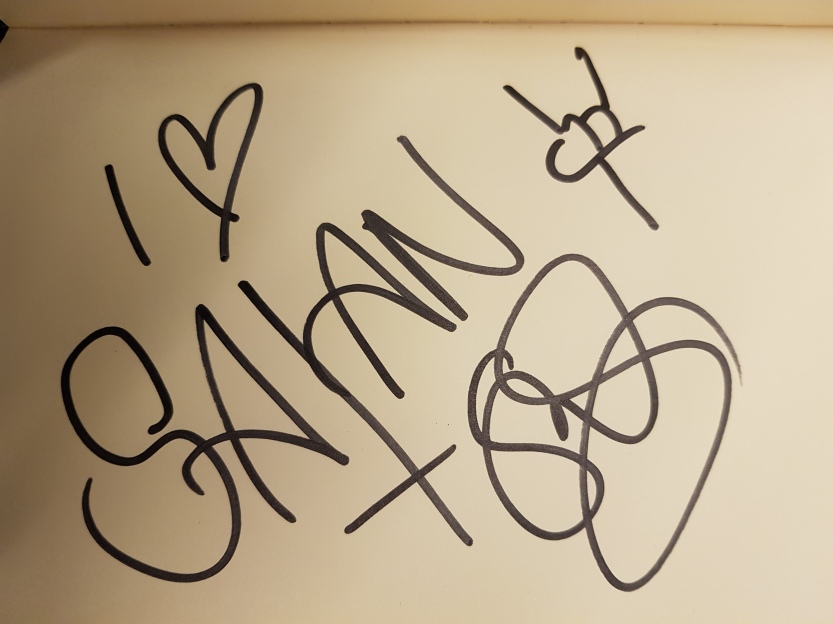 The following post will be rather controversial, as it talks about religion, or better the lack thereof when it comes to Yours Truly. The image I use here is an autograph my mate Dav (from BAND!) scribbled into my scrapbook in December. If you know Dav, you also know that he’s nuts, and I love that I can play with a cliché here as us Metalheads are all Devil Worshippers, anyway (NOT. TRUE.). If I haven’t offended you until here, then please rest assured – DO NOT by ANY means come here to my virtual turf and try to proselytize me. Others have tried their luck and failed miserably doing so. I do not mind if you believe in God and Jesus, but please refrain from shoving your faith down my throat. Thank you.

So, this little paragraph should have already given you a hint of what is going on – I am a convinced Atheist and have been for many years. It kinda happened gradually, and several factors played their part in it. Growing up in rural, small town Germany, I was also located smack dab in the middle of some kind of Bible Belt with lots of various religious groups around – Jehova’s Witnesses, some fundamental Protestants, sects … you name it, and for some reason, I had some kind of talent (or maybe a magnet??) to attract those who firmly believed they were put on this Earth to do God’s work and make people convert. Interestingly enough, I’ve only had run-ins with … CHRISTIANS … doing so. Never in my life has any Muslim, Buddhist, Jew, Hindu …whatever tried to succeed in this. JUST. SAYING.

Actually, I am currently reading a book about early Christianity and how Christians destroyed the ancient world of Greeks, Romans etc., as in: their temples, their statues, their polytheistic world views, their writings (esp. Philosophy) – it’s hella interesting! Just like for example Al-Andalus in Spain where Jews, Christians and Muslims were living side by side, until the Reconquista started.

This is what I find interesting about religion, though: the way various religions came to be and how they shaped the history of the world. Yeah, I at times love me some history, and especially the medieval period (after all, I am fascinated with the Knights Templar). But also – it’s scary, in a way, to see how much evil was caused BECAUSE of religion.

Now, I stated that I haven’t always been an Atheist and that I bit by bit turned into one. I shall elaborate on this a bit …

As I have stated, I grew up with a lot of religious groups around me, and while they did not really have an impact on me, they sure made me feel uncomfortable. I can’t tell you exactly why. But to me, it felt …strange. At some point in my life, I sort of discovered Buddhism and found myself really attracted to this religion, but never really converted. It was just something I added on my sheer endless lists of things I was interested in. At the same time, I also identified mostly as Agnostic. As in, I could not say if there really is a God, or any other Divine Being out there. It’s possible, but not certain. Agnostics also have a knack for and are driven by science and view the world through scientific eyes. Which seemed all the more logical for me. Although I myself am not exactly a scientiest, I’ve had an interest in nature from an early age on, and literally dove headlong straight into astronomy and anything that had to do with the Universe, Big Bang Theory (no, not the series) included. I’d read about dinosaurs, Neanderthals, and whatever else I could get my hands on and wrap my head around. (I guess I’ve always been a nerd …)

As I grew older, I had the above mentioned run-ins with some hardcore Christians, and if anything, they drove me away from any religious thought I might have ever had. Their arguments ranged from “we don’t read Harry Potter” to “the movie Matrix is an atrocity” to beating the dead horse “Metal fans are Satanists.” Uhm. Okay. Yeah, I do wear black A LOT, I curse like a sailor, and all that jazz, but not once have I attended a Black Mass whatsoever.

As it happened, one of those Christians was some lady who had found God at a relatively later stage in her life, but boy, was she HARDCORE. Yes, she had plenty of other interests, too, among them sports, but at some point, she had apparently decided that I needed to be saved, that I needed God and Jesus in my life yadda yadda. It got to the point when I broke contact with her, I couldn’t take it any longer. When I posted song lyrics somewhere, she’d dissect them and tell me that only God or Jesus could do whatever was addressed in the lyrics. Made me feel uncomfortable. The final straw was when she had a go at me because I was a total football (soccer) nut back then, and she went on a rant how football was my God and how she was “looking forward to the day when this will be destroyed!” How it was not okay if I was in a bad mood when my team/s lost and all that, and I was like, excuuuuuuuuuuse me?! It went on for a bit, but after some time, I was legit exhausted. Exhausted because it’s obviously of no use to try to discuss your stance with the hardcores, they don’t accept a no. I also found it extremely intolerant that she didn’t accept any other point of view on this matter …

Again, I absolutely have no problem if anyone believes in God and Jesus, if that’s your thing – fine, be my guest. However, I DO mind if folks act like that and want to force their faith on me. Religion should be an entirely personal matter, as in – it’s up to the individual which religion they choose or don’t choose. It drives me up the wall. I found Atheists and Metalheads far more open minded and tolerant than some of those fundamentalists or whatever-you-wanna-call-them. So yeah, after having my patience and all tested so hard for some time, I called it quits. As in, I stopped talking to her. I had freaked out as well, and uber-religious people are my absolute BIGGEST pet peeve out there. Nope. Just … NOPE. GO. AWAY.

So here I am, an Atheist, and proud of it.

And actually, this entry was inspired by an incident from last Friday. My doorbell rang, so I walked to the front door, and sure enough, there were two ladies who wanted to talk about God and the Bible with me.

Of all the people who live here in this house, they got the Metalhead and hardcore Atheist. Fortunately, I was “only” wearing a MILLENCOLIN longsleeve I had slept in, and not one of my “evil” metal shirts, like for example DISTURBED‘s “The Guy”, and there was no appropriate music the likes of TYPE O NEGATIVE, AMON AMARTH or MARILYN MANSON blaring out of my flat – they 666% 😉 would’ve called an exorcist. XD

And yep, you guessed it – Jehova’s Witnesses, whom you can relatively easily tell “Thanks, but no thanks.” Which is what I did, so they left again without much of a fuss and I returned to my Safe Space. I was highly amused, though – this whole thing was just too fucking funny. I mean … of all the people, they run into the one who’s an Atheist.

Yeah, I have zero chill. ZERO. And I will sure end up in Hell – but with VIP credentials!

4 thoughts on “Losing My Religion”