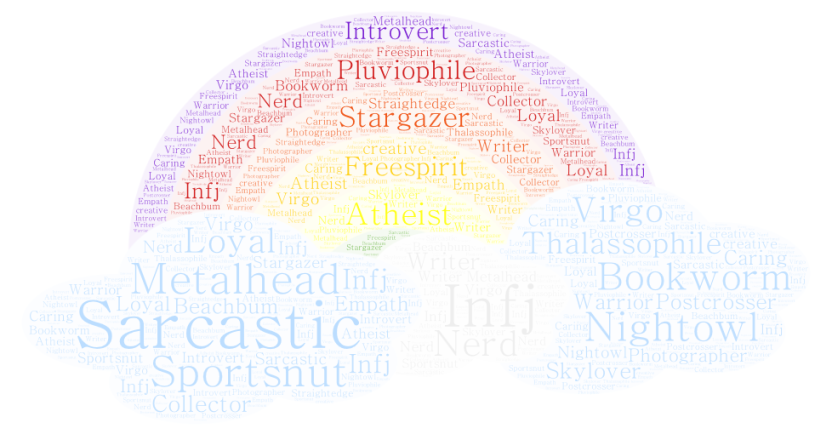 While I have never seen the movie I stole today’s headline from, it still fits to a T. I am definitely not your average girl. And I quite frankly don’t even want to be. I have always been different, and to this day, I proudly let my freak flag fly 24-7-365 (366, if it’s a gap year).

I was playing around with some words that make me ME, that kinda define me, and well, if you look at this colorful little word cloud I designed, you will notice the absence of “anxiety” and “depression”. Thing is, while I DO battle these two on a daily basis, they don’t define me. Yes, both are a part of me, but I will not allow them to consume me so entirely that they become me. If that makes any sense? It’s enough already that both of them can be so tough to deal with that I at times can barely leave the house. Likewise, I left out some of my phobias, as they correlate with anxiety, anyway.

Instead, I focused on the more positive things. Beautiful ones, if I may say so. Some of them I will not really elaborate on as I have done so in previous entries – hint: being a sports nut or music lover or bookworm -, but there are still some which I think are well worth mentioning.

Let’s start with the NIGHT OWL. First of all, I love owls. Amazing birds. But that is to say, I am someone who’s more active when it’s late, and especially night. Even though I used to be scared of the dark as a child (and it took me many, many years to overcome that fear), there is something beautiful about the night (stargazing, anyone?). Don’t get me wrong, day time activities are, obviously, also fun and all, but I prefer the later hours of the day. Mostly, when I am creating stuff, it’s also rather during the late afternoon or early evening. I feel more comfortable then, and of course, my creativity seems to be at its peak rather during the later hours.

Speaking of feelings – I am an EMPATH. Not only do I need to be in a certain state of mind to be able to put those creative thoughts into actual works, I also have a very good sense of people or situations. Meaning, a) I need to “feel” what I am about to do when creating and b) I can with an almost 100% accuracy tell if something’s “off” about a person or situation. I am also one of those who, even though they have their own struggles on a daily basis, are there for their loved ones. Unfortunately, this can be a blessing and a curse as well – the moment when you put others’ needs far before your own, just to please others, it gets toxic. Something I have learned the VERY hard way.

Empaths also tend to help others a lot, and they want others to be happy. Which is, as I have mentioned in an earlier entry and which a lot of people around me can confirm, why I enjoy those random acts of kindness. If you’re struggling in life, I might just send you a postcard or something to cheer you up. I see something that reminds me of you? If possible, I’ll send it your way.

The problem with being an empath, however, is that not just do we feel others on various levels. In times like these, with the hectic humdrum of what’s going on in the world, the news, a constant bombardment of overflow due to social media (don’t get me wrong, I enjoy Facebook, Twitter and instagram, but at times, it’s getting … too much), being an empath can be very exhausting, too, as I at times cannot seem to let go, let things I cannot change affect me too much.

Therefore, it is no surprise that my Myers-Briggs personality type is INFJ. I did that test twice within a time span of two years and both times got the very same result. I know, I know, some might say, “But you are so outgoing! You sure you’re an introvert?”

I am. While I do occasionally mingle with the crowds at concerts, sports games, or other social gatherings, I prefer being on my own. And I rather be among let’s say five close friends than 50 loose acquaintances. Plus, when I am back from one of those social events of whichever kind, I will need some Me!-Time to be able to recuperate and recharge those batteries afterwards, as, in contrary to extroverts, being among people drains my energy levels.

“INFJs are deeply concerned about their relations with individuals as well as the state of humanity at large. They are, in fact, sometimes mistaken for extroverts because they appear so outgoing and are so genuinely interested in people—a product of the Feeling function they most readily show to the world.” (source: wikipedia)

There you have it once again – the empath. Also, other traits in an INFJ are creativity, they love to write and bring their points across in written form, deep thinkers, as well as a whole lot of others: 21 Signs of being an INFJ.

Tbh, I have read a lot about this personality type – which is said to be the rarest of all 16 Myers-Briggs types -, and it is SO me, it’s almost scary. And yes, I have cut off people, too – not just because they  hurt me, but because they got too exhausting for me and legit sucked out my energy, all while I myself was on recovery.

And finally, there’s being a pluviophile and thalassophile, and I can see your faces forming questionmarks.

PLUVIOPHILE is someone who loves rain. They find peace in the sound of falling rain – for me, it’s one of the most soothing things in the world: lying in bed, listening to the rain outside. It has such a calming effect on me! Also – the air after a lush summer rain, no matter if you’re in the city or the country side, it’s so lovely! I remember last year, during this scorcher of a summer: one day, there FINALLY was a thunderstorm, and while they scare me, I opened the windows afterwards because of the air outside. Refreshing, in a way.

THALASSOPHILE should be almost self-explanatory, considering this blog’s title. Someone who loves the ocean. The wide open. The sound of waves. The salty air. Sand underneath my feet. Sitting at the beach, looking out at the sea, listening to the waves (and seagulls). Helps me to forget all my woes and worries for a while, puts my mind at ease. I am happy when I am at the ocean. It’s a wonderful form of therapy, in a way. Does wonders to my soul. I am …FREE… there. No wonder that there’s some maritime decoration to be found in my flat!
That being said, I am in some kind of need for a couple of Beach Bumming Days again, even more so since I still have the sniffles from Hell. Boo. Sometimes, I wish I had some kind of secondary residence near the beach, but since that is – at least at this point – not possible, I at least hope to be able to go to the Baltic Sea again for my birthday in August. The little time out there sure was bliss.

Okay then. This got really long once again, but once the words started to flow, I had to let them out. I know, I haven’t elaborated on some other things mentioned in the word cloud, but either, they are a story for another time or I didn’t consider them suitable for this entry.

word cloud made with https://wordart.com/create