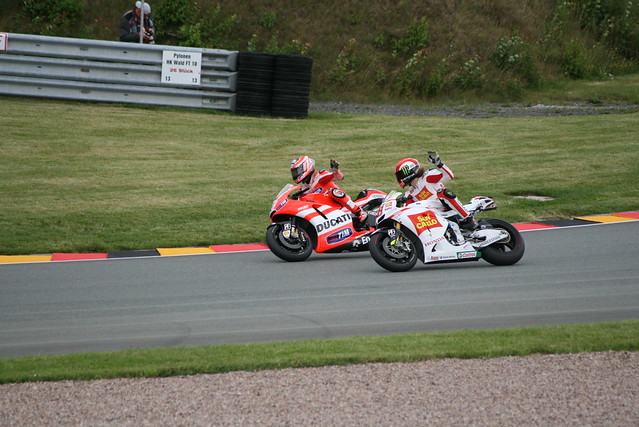 A date like most other dates on the calendar. Some may celebrate their birthdays, others are busy with life, some died that day.

Last year, May 22 was an emotional rollercoaster par excellence. I had just tweeted my favorite Patriots player, Julian Edelman, a “Happy Birthday” when a couple of minutes later, an iron fist hit me right in the stomach, a lump appeared in my throat and I felt tears in my eyes.

Nicholas Patrick Hayden, better known as Nicky Hayden (or the Kentucky Kid), had succumbed to his injuries which he had suffered in a bicycle crash. He had collided with an on-coming car, and the news which got out bit by bit didn’t look all too positive: induced coma, polytrauma, multiple broken bones, and on life support.

MotoGP and WSBK fans around the globe formed support groups, hoping for the miracle which unfortunately didn’t happen. On Monday, May 22, 2017, his family had to make the most difficult decision of their lives: letting Nicky go.

I, just like the whole MotoGP family, was devastated.

Nicky Hayden was my favorite rider. Although I’d arrived terribly late to the sport, he was who “hooked” me on it in 2010.

I’ve always loved motorcycles, there is just something kinda …sexy… about them, especially race bikes. Watching a couple of races was also something to divert my mind from the ongoing storm inside me. And while everyone loved Valentino Rossi (don’t get  me wrong, I admire him, but he was not THE rider for me back then), I found that American who was racing that red Ducati with #69 on it rather appealing.

I mean … that smile!

The more I read about him, the more I liked him. His “Never give up, never give in” attitude, the way he lived for racing (no surprise as he was born into a family of racers), how he always fought back after injuries and all that – it left a mark. He quickly became someone I looked up to, even more so while I was still in my super-dark place.

2011, I traveled to Sachsenring Circuit to watch him race. That’s where I got the featured photo of this entry from. The guy on the white bike is Italian racer Marco “SuperSIC” Simoncelli, and now, this photo has another, tragically beautiful meaning: they were waving at the audience on their cool down lap there. But now you can say they’re waving “goodbye”.

Simoncelli tragically lost his life on the track in Sepang (Malaysia) when he crashed in a race in 2011. While I wasn’t a fan of his, I liked his riding style, and well, having to watch this fatal crash on TV was gut wrenching. Shortly afterwards, he passed away. I remember the emotions I went through back then. Crying. Shocked. In disbelief. Watching his funeral on a live stream was absolutely heartbreaking. I have no idea how I made it through, but I just felt I wanted to be there, virtually, that is.

If anything, it brought me even closer to the awesomeness that is MotoGP, and I of course had to be back at Sachsenring the next year.

This time, I had also managed to get access to the paddock where I had the chance – make that HONOR – to meet Nicky twice. The second time around, the Sunday after the race, I admired how kind and patient he was once again with the fans waiting for him. I looked him dead in the eye: “May I give you a handshake?”
He agreed, and I said, “You are my biggest inspiration!”
His eyes lit up, his smile got even brighter: “Thank you!” He was definitely moved by this.

As I am typing this, I am wearing a t-shirt I bought at that race. It reads THE KENTUCKY KID on the front, including an image of Nicky on the bike, as well as #69 on the back of the shirt.

Fast forward to this tragic day in May 2017.

It’s still so unreal. Just this weekend, I was thinking of him again, of how brutally cynical his fatal crash was. For his entire life, he’d been racing those bikes which go up to 300+ kph, and he “only” broke a couple of bones doing so. Joining World Superbikes, his dream was to become the first rider to win the American Superbike, MotoGP, and WSBK Championship. As hard working as he was, and as he continued believing in his dream, he could’ve made it, I am convinced of that.

And then he is out training on his bicycle, not far away from the race track in Misano (which has been re-named to Misano World Circuit Marco Simoncelli), collides with a car and … dies?? NO. I refused to believe it at first (even more so, since some fake news outlets had already reported on the weekend before that he had died; which was, obviously, not true – it didn’t look promising, yes, but Nicky’s a fighter, so I clinged to the tiny hope that he’d pull through), but it was confirmed not much later.

I was staring at the screen of my laptop in utter shock. My mind drew a blank.

Lump in my throat. Knot in my stomach. Tears.

Bit by bit, it trickled in, and yet felt entirely unreal for months. Even when his fellow riders from WSBK and MotoGP paid him a tribute the following race weekends, even when I saw that blue coffin at his funeral (I couldn’t watch it in its entirety, ten minutes in, and I was a sobbing, crying mess), it was beyond my grasp. NOT NICKY. Not this positive young man who wanted to get married to his fiancée, Jackie, in the summer of 2017, and who was ready to conquer the world in WSBK as well. Not this smiling champion. Not this loving uncle, brother, son.

But there it was.

Goodbye, Nicky. Thank you for your smiles. For your positive attitude. For teaching me (and many others) that it’s worth to chase one’s dreams, what it means to never give up. For being … YOU. You have touched my life in a way I will be eternally grateful for.